President Joe Biden's 100-day moratorium on deportations remains in legal limbo after being blocked by a federal judge in Texas at the end of January. But the halt as well several executive orders signed on immigration signal that the new administration is planning to chart a different course on deportations than its predecessor.

The number of deportations and so-called returns (in which undocumented immigrants are turned back without starting an official appeal) increased significantly under former President Donald Trump. In the fiscal year 2019, the latest available from the Department of Homeland Security, their numbers exceeded 500,000 - up from a low of around 380,000 in fiscal year 2017, when Trump took office.

2019 and 2018 saw high a number of border arrest, including those of many families from Central America, likely driving up removals which are normally carried out shortly after arrival. But the Trump administration through ICE also targeted undocumented immigrants who had been in the country for longer, leading to a rise in formal deportations.

Previously, the number of total removals from the country had been in decline since the year 2000. Looking only at formal deportations, however, their numbers peaked in 2013 under Barack Obama. This earned the former president the nickname deporter-in-chief, despite the fact that total removals continued to decline during his presidency.

Obama inherited a system of more formal immigration proceedings from his predecessor George W. Bush, who started the change over from thousands of returns to more formal deportations, also in connection with the founding of ICE, which is responsible for immigration enforcement in the interior of the country, in 2003. Another factor in the decline of informal returns was the Great Recession, which caused fewer people to cross the border in order to seek work in the United States. Economic progress and an ageing society in Mexico also translated into a drop in people crossing the border.

Before the coronavirus pandemic, immigrants from Central America had started to cross the Southern U.S. border more frequently than Mexicans. While this caused the number of border arrests to increase sharply in FY2019 to around 850,000, the number is still below that of 1 million to 1.5 million people who were arrested annually in the 1990s trying to cross the border. 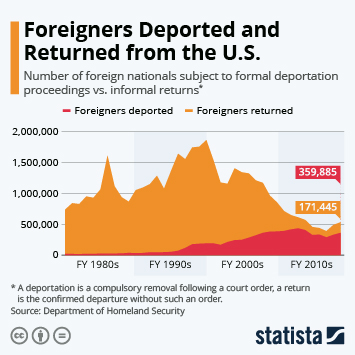 This chart shows the number of foreign nationals subject to formal deportation proceedings vs. informal returns in the U.S.