“The Last Dance”, the ESPN documentary about Michael Jordan and his last season at the Chicago Bulls, has not only captivated American sports fans for the past few weeks, but it also reminded people of how great an athlete Jordan was, all of his flaws notwithstanding. As the documentary clearly shows, Jordan was no stranger to controversy during his playing career, and yet, whenever he stepped on court, he transcended into this otherworldly figure seemingly unconstrained by the laws of physics.

While not uncritical of Jordan and his sometimes harsh demeanor on and off court, the documentary will probably cement his legacy as the greatest player of all time, if at all necessary. As a recent ESPN poll shows, Jordan is already considered better than his heir apparent LeBron James in every respect of the game. According to ESPN, 73 percent of the 600 NBA fans polled think that Jordan is the better overall player than James, while 76 percent would trust him over James to take the game-winning shot.

Jordan is considered the better offensive and defensive player, the more spectacular one to watch, and, stepping off the court, the one people would rather have a drink with. 63 percent of respondents would also pick him as a teammate over James, which some might consider surprising, given how hard "His Airness" pushed his teammates in practice and how ruthless he could be if someone didn't follow his lead. 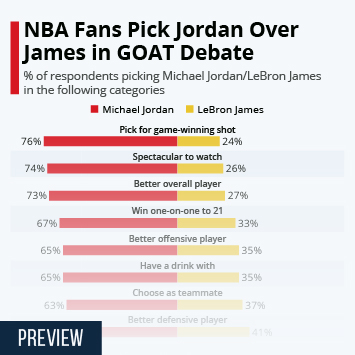