The Small Business Administration has released another batch of data on its $650 billion Paycheck Protection Program for small businesses during the coronavirus pandemic. The data shows that two thirds of loans given out were for amounts of $50,000 or less, while the total amount of dollars loaned in this smallest of increments was only approximately $57 billion – just over 11 percent of the total 521 billion paid out thru June 30.

Another 27 percent of loans – or $168 billion – were paid out in increments between $50,000 and $350,000. Million-dollar loans, while accounting for less than two percent of all loans, racked up $181 billion in costs. The PPP program has caught some flack since its inception for providing loans to some businesses which might not meet the definition of small. Shake Shack and many more have returned loans, but other larger firms have held on to theirs.

Video data company Quantum Corp., for example, had been approved for a $10 million loan by April and, as of late June, was still named among PPP recipients. The publicly listed company, which counts Buzzfeed and NASA among its customers, had a market capitalization of more than $160 million as of July 7. Other big names on the list, receiving between $5 and $10 million each in loans, were Piggly Wiggly’s Distribution Company by the same name, P. F. Chang’s, Jelly Belly, Korean Airlines, Forbes Media and White Castle.

Out of the 40 publicly listed companies named as PPP recipients by Morgan Stanley in April, nine remained on the current list, while more were probably added. Loans went out to all 50 states, according to the Small Business Administration. While the loan approvals as a share small business payroll varied between 72 and 93 percent depending on the state, Florida had the highest share at 96 percent. 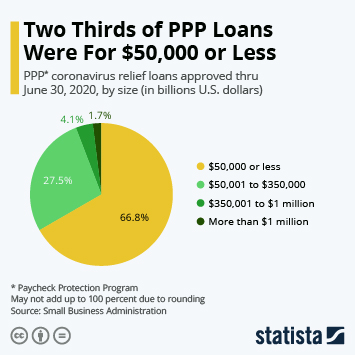