In September, the arrest of Delhi student activist Umar Khalid and seven peers under the Unlawful Activities Prevention Act caused headlines in India. After violent protests around the rights of religious minorities shook India in late 2019 and early 2020, the UAPA has gained some notoriety as protesters were charged under the act, which was put into law in 1967 as an anti-terrorism measure but lived in obscurity for most of its existence.

Those days are now over, as data from the National Crime Record Bureau shows. Since 2014, the first year the bureau’s report listed charges brought under the UAPA as a separate category, active cases have been growing steadily.

According to The Indian Express, Khalid remained in jail as of December 2020. He is accused of planning “communal riot incidents”, giving provocative speeches and urging people to protest to make sure the “propaganda of minorities in India being persecuted” would be publicized. In February, violence between Muslims and Hindus broke out in Northern Delhi around the time of the visit of U.S. President Donald Trump. In the course of the altercations, mosques and Muslim businesses were torched. 53 people died, among them 13 Hindus and 40 Muslims. 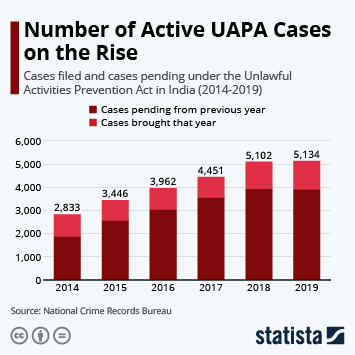 This chart shows the number of active cases under the Unlawful Activities Prevention Act in India between 2014 and 2019.