With less than a month to go before the presidential election, voters are homing in on the issues that matter most to them when deciding who gets their vote. Healthcare, climate change and the economy are among the top traditional issues voters are considering, while the coronavirus, unemployment and race relations are all larger issues that have emerged in 2020. A new survey shows which issues Republicans and Democrats are focused on the most ahead of the election.

In a new survey from Gallup, wide partisan differences in key issues and policies were observed between Democrats and Republicans with just one month before the election. For Republicans, the economy, terrorism and crime captured nearly all of their party’s attention, whereas for Democrats, healthcare, race relations and the coronavirus were observed as top priorities.

It is yet to be seen whether Donald Trump’s recent positive infection of COVID-19 will push Republicans’ priorities more toward the coronavirus. Out of the many issues polled by Gallup, Republicans’ interest in the coronavirus was near the bottom – just ahead of climate change and relations to Russia. 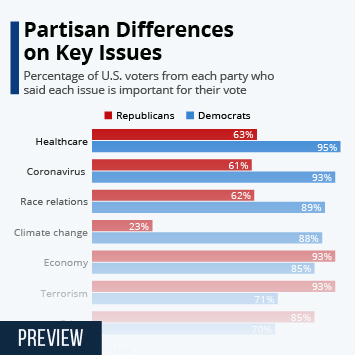 This chart shows the percentage of U.S. voters from each party who said each issue is important for their vote.