With the second wave of the coronavirus underway in Europe, countries like Czechia and the UK as well as many more from the continent have moved up among the ranking of coronavirus cases per capita compiled with data by Johns Hopkins University. The continuously growing outbreak in the U.S. has meanwhile made the country the second-most affected per capita in the world, up from rank 6 two months ago.

Previous to Europe’s second wave, Latin American and Gulf states had scored most poorly in the ranking. They remain hard-hit with around 40,522 cases/million in Brazil and 71,350/million in Panama. The most-affected Gulf nation relative to population, Kuwait, counted comparably fewer cases at just more than 38,000 per million population. Israel, which has been the swiftest vaccinator so far, counted more than 62,000 per million population as of Sunday.

Even the most hard-hit countries in Asia are well below those numbers when counting cases by population. India – the second most affected country in the world by total numbers – only has a relatively small tally of fewer than 8,000 confirmed cases per million population and the hardest-hit in relative terms, Singapore, only counted around 10,500. Other countries in the region fare even better despite the still-raging virus. The Philippines counted 4,700 cases/million, while Indonesia only counted around 3,500.

After case counts grew somewhat in Africa, China currently has the lowest per-capita count in the ranking at only 70 cases recorded per one million people. African nation Nigeria counted a still low 563 cases per million and Burkina Faso, Mali, the Democratic Republic of the Congo and the Republic of the Congo are beating that still (even though doubts about how wide-spread their testing is persist). The most affected country on the continent was South Africa, counting more than 23,000 cases per million population, followed by Libya at around 16,500. The most affected country in Sub-Saharan Africa after South Africa was Zambia at just over 2,000 cases per million people. 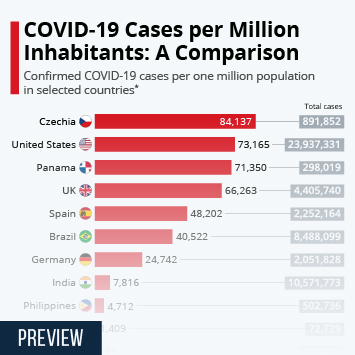 This chart shows the confirmed COVID-19 cases per one million population in selected countries.