The desegregation of schools between Black and White students in the 1970s and 1980s led to a surge in diversity among both public and private institutions across the U.S. An emerging trend, however, shows the number of Black students in schools with a majority of White students is quickly moving backward toward levels of segregation not seen since the 1960s. Data points to how this could have a generationally negative impact on education equity in the country.

The policies and federal laws implemented during the Civil Rights Movement in the 1960s had enormous, positive impacts on desegregating the education system in the U.S. But starting in the 1980s and 1990s, lawmakers and the U.S. court system once again neglected these new systems of equality and equity. In 1991, the Supreme Court ended a school integration order in Oklahoma City, setting a precedent for the next quarter century that contradicted the one set in Brown v. Board of Education in 1954. School localities could now evade desegregation orders if deemed in a “practical” way, opening the door for the clear trend reversal being observed today.

Other factors in school choice and which cities and municipalities Black families are living also play an important role. Overall, culturally diverse schools seem to be increasing in many large cities. Data provided by The Civil Rights Project shows a growing integration of Latino students within majority White schools across the country, along with a growing number of Black and Latino majority schools.

Still, the history of the U.S. is one where non-White majority schools receive significantly less resources and funding than White majority schools. The Civil Rights Project recommends the immediate action of local governments to act on modern desegregation policy, and to focus on and create comprehensive equity plans to secure a future of equal education for all students. 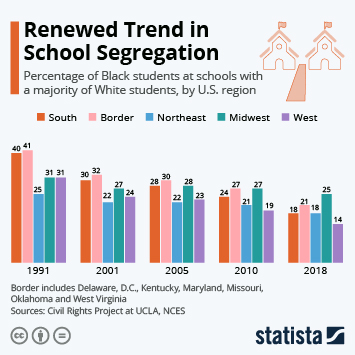 This chart shows the percentage of Black students at schools with a majority of White students, by U.S. region.