The American Society of Civil Engineers (ASCE) has released its 2021 Report Card for America's Infrastructure. Compiled every four years, it comprehensively assessed 17 major infrastructure categories on a range of criteria such as capacity, condition, funding and public safety. They were then scored through a simple A to F school report card format. The good news is that the American infrastructure has improved, with the country's score climbing from a D+ in 2017 to a C- in 2021. It is the first time the U.S. has been out of the D range in two decades.

Despite the progress, it was not even everywhere and 11 out of 17 categories still recorded D grades. Elsewhere, five saw their grades increase while just one - bridges - experienced a decrease. While things are going in the right direction, the bad news is that the long-term infrastructure investment gap is continuing to grow with the report stating that the weU.S. is only paying half as much as it needs. The investment gap has now climbed from $2.1 trillion over 10 years to nearly $2.59 trillion over 10 years.

The report states that continued underinvestment in infrastructure at current rates will result in serious economic consequences. By 2039, $10 trillion is GDP will be lost, along with $2.4 trillion in exports. Morethan three million jobs would also be lost. By the end of the next decade, the situation will cost the average U.S. household $3,300 a year or $63 per week unless there are changes. The research has recommendations such as implementing a plan to renew, modernize and invest in infrastructure with maintenance as its central focus.

The U.S. has $5.9 trillion in infrastructure funding needs up to 2029 with $3.35 trillion in place. The biggest investment gap is in surface transportation (roads, highways, bridges and public transportation systems) which requires a financial injection of $1.2 trillion up to 2029. Drinking water, wastewater and stormwater along with schools also require considerable investment at $434 billion and $380 billion, respectively. 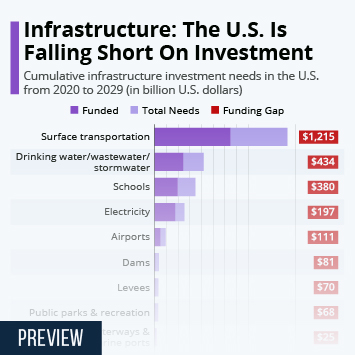 This chart shows cumulative infrastructure investment needs in the U.S. from 2020 to 2029.