What do Gloria Estefan, Michael Jackson, James Brown, Stevie Wonder and Phil Collins have in common? Aside from the fact that they've all sold tens of millions of records around the world, they have all performed at the Super Bowl.

The Super Bowl has always been about more than just a game of football, and as the list above illustrates, it has attracted some of the biggest names in show business over the years. The cast for this year's halftime show promises something special, however, as it brings together five generational artists, each of whom big enough to be there on their own.

When main sponsor Pepsi dropped a teaser video three weeks ago, announcing that Eminem, Snoop Dogg, Mary J. Blige, Kendrick Lamar and Dr. Dre would perform at Super Bowl LVI, in Los Angeles of all places, the internet went wild. The video has amassed almost 14 million views to date and the actual show is all but certain to make an even bigger splash.

As the following chart, based on RIAA data shows, Eminem is the biggest of the five in terms of album sales in the United States. The rapper from Detroit has sold 46.5 million albums throughout his career, almost matching the combined total of his four co-stars. Kendrick Lamar, by far the youngest of the supergroup, has "only" sold 7.5 million solo albums, but no one would question his cultural significance over the past decade. 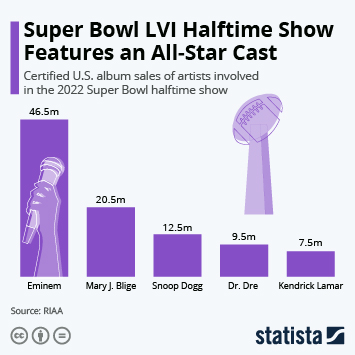