Published by
Stephanie Chevalier,
Oct 20, 2021
Launched in the U.S. city of Chicago just a month before the beginning of the 2008 global financial crisis, the deals site Groupon proved to be a real lifeline for both consumers and sellers in times of economic uncertainty. Over a decade later, this marketplace remains one of the most popular coupons and discount sites worldwide. However, the last few years have presented a real challenge for the firm, which has seen its financial results slump. Unlike the “great recession” of 2008, the COVID-19 pandemic seems to have exacerbated an already dwindling situation.

The end of Groupon golden days?

Following a year of disappointing results, Groupon's CEO and co-founder, Andrew Mason, was removed from his duties in February 2013. Since then, the company has been on a roller coaster ride. Despite reaching an all-time high of three billion U.S. dollars in global revenue in 2016, this figure has gradually fallen over the last few years. With the coronavirus taking its toll, consumers across the globe stopped traveling and engaging in social activities, leaving the daily deals site with revenues below 1.5 billion dollars in 2020. In recent years, Groupon has struggled to retain, let alone grow, its user base. Between 2017 and 2020, the number of active customers on the site halved from nearly 50 million to less than 25 million.

Born in Las Vegas, Nevada, the deal-sharing website Slickdeals stands as Groupon's biggest rival, registering nearly twice as many visits in the United States and globally. While Groupon made its name through its web portal, the growing demand for mobile solutions has led the company to increasingly invest in its app. In 2020, Groupon was the fifth most downloaded free discount and offers app in the world, far behind, however, Singapore's Shopee. Meanwhile, in the United States, it was surpassed by the savings applications Fetch Rewards and Ibotta, which registered 12 million and 5.6 million downloads, respectively.

In the following 4 chapters, you will quickly find the 30 most important statistics relating to "Groupon".

The most important key figures provide you with a compact summary of the topic of "Groupon" and take you straight to the corresponding statistics. 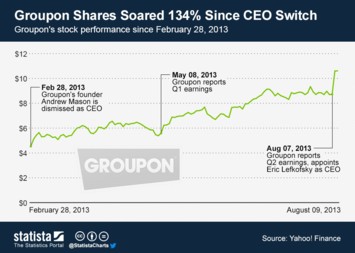