40k
57k
41k
9.6k
Donald Trump has been in power as the 45th President of the United States for a year, since his inauguration on January 20, 2017. The set-up of the international arena has long been shifting, away from lone American leadership towards a more multipolar world in which other powers are gaining influence. Trump’s political agenda seems to be speeding up this process, as data by research institute Gallup on the worldwide approval of U.S. leadership suggests.

Ever since the Second World War came to an end in 1945, the United States presided over the so-called “Pax Americana”, she had inherited the position of world leadership from Great Britain, who saw her long-standing predominance in the world dissolve together with her pre-war empire. This new set-up had its ups and downs, but brought with it a promise of stability during the Cold War stand-off with the Soviet Union, and even after the Berlin Wall fell in 1989.

While the United States has always been willing and ready to wield her military might, the basis of her strong leadership position had to do with other nations accepting her as an agenda-setting hegemon. This order of things has been called into question from the outside, by emerging powers. Most notably China is challenging the status quo as she is constantly gathering economic and therefore political clout.

But this process, it seems, is also being hastened from within the United States itself, by domestic politics. Since Donald Trump became president on an “America first” ticket, the world seems to become less accepting of America as a lead nation. There is a somewhat tragic, or at least ironic, ring to Trump’s often repeated vow to make “America great again”, as he might be the president who cements America’s fall from grace and power in the international arena. 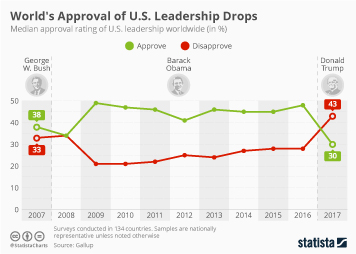 This infographic shows the median approval rating of U.S. leadership worldwide (in percent)