40k
57k
41k
9.6k
It has proven a deadly week for the European rail network. In the wake of last Tuesday’s tragic derailment near Santiago de Compostela in Spain which claimed 79 lives, two regional trains collided at Granges-près-Marnand in Switzerland yesterday. The driver was killed and 24 passengers were injured.

Before the disaster in Spain, rail safety in Europe seemed to be improving dramatically since the dark days of the 1990s. In 1990, collisions at Rüsselheim station in Germany and Wlochy in Poland caused 17 and 16 fatalities respectively – 71 people died in European railway accidents that year. 1998 was especially disastrous – 101 passengers perished in the Eschede ICE derailment in Germany. A shocking 121 people died in 1998 in total.

The situation improved until the Viareggio train derailment occurred in 2009 in Italy, claiming 32 lives. By the end of that year, 69 people died in railway accidents across Europe.

By contrast, the United States has been making steady progress at reducing railway related fatalities. 1993 proved the deadliest in over the past two decades when an Amtrak train hurtled against the Big Bayou Canot bridge in Alabama before derailing and exploding. 47 people were killed – 67 people died in accidents on American railways that year in total.

Another notable accident occurred in 2009 when 25 people died in a collision in Los Angeles. Even though one must take the EU’s larger population into consideration when comparing railway safety statistics, both networks are of similar size. The EU’s network is some 221,000 kilometres long, while the US is close behind with about 210,000 kilometres. The reality of the situation is that fatal train crashes are rarer in the US than in the EU. 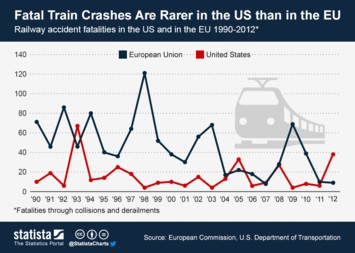 This chart shows railway accident fatalities in the US and in the EU from 1990 to 2012.