Just like Rome, the United States weren’t built in a day – in fact it took 172 years for all 50 states to be added to the Union. Hawaii celebrates 60 years of statehood this Wednesday. The islands were the last state to join the U.S. on August 21, 1959.

Vermont was the next one to join, and did so in 1791, followed by Kentucky and Tennessee before the turn of the century. By 1850, the U.S. had 31 states, with California having joined that year. In 1900, it counted 45 states, the last addition being Utah in 1896. Oklahoma, Arizona and New Mexico joined by 1912, completing the lower 48. It wasn’t until 1959 that Alaska and Hawaii became U.S. states.

The idea to establish Alaska as a state was rejected by many in Congress at first, given the large-scale exploitation of Alaskan natural resources that an independent state could have sought to regulate. In the case of Hawaii, which became a territory in 1900 after annexation, several attempts at statehood fell flat because of plantation businesses thought to be running more smoothly outside of state regulations.

Today, the U.S. still has control over five populated overseas territories (Guam, American Samoa, Puerto Rico, the Virgin Islands and the Mariana Islands). Puerto Rico has held multiple referendums gauging its citizens’ desire to become a U.S. state, but positions on the issue are highly contested. While statehood would mean better access to state resources like health care and other federal funds, it would also mean Puerto Ricans would have to pay federal taxes (on top of local taxes). Statehood could also help with restructuring the island’s debt, which currently exceeds US$100 billion between bond debt and unfunded pension liabilities. Statehood would allow municipalities and government agencies to file for bankruptcy and have some of their debt eliminated this way. 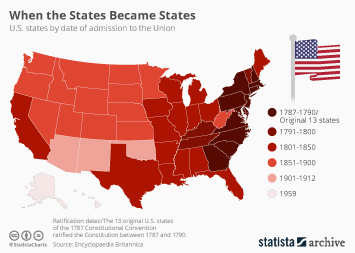 This chart shows when the 50 U.S. states reached statehood.