Moët Hennessy Louis Vuitton (LVMH), the world’s largest luxury goods company, announced on Monday that it would acquire Tiffany & Co. in an all-cash deal worth $16.2 billion. The two companies had been in talks over a possible acquisition for several weeks before finally settling on a price of $135 per share of the iconic jeweler.

With the acquisition of Tiffany, LVMH, home to a vast array of luxury brands already, is looking to strengthen its position in the jewelry market and expand its presence in the United States. “We are delighted to have the opportunity to welcome Tiffany, a company with an unparalleled heritage and unique position in the global jewelry world, to the LVMH family,” LVMH CEO Bernard Arnault said in the company’s announcement of the deal.

Already a market leader in what is often referred to as “soft luxury”, i.e. leather accessories, bags and clothing, the deal will roughly double the size of LVMH’s “hard luxury” business (i.e. watches and jewelry) at once. As the following chart shows, the French owner of Hublot, Tag Heuer and Zenith (among others) generated $4.72 billion in sales in the Watches & Jewelry segment last year. Tiffany’s revenue amounted to $4.44 billion in 2018, illustrating how big a boost the deal will give to LVMH’s ambitions in this particular segment of the luxury market.

Valued at $16.2 billion, the acquisition, still subject to shareholder and regulatory approval, will be the largest M&A deal in the luxury market to date. 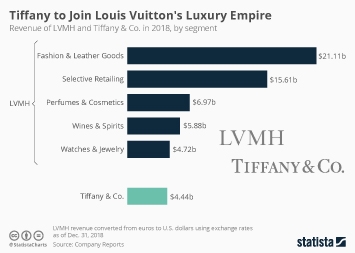 This chart compares the revenue of LVMH's different operating segments to Tiffany's total revenue in 2018.