As the Biden administration settles into its first term, U.S. foreign policy is looking more eager to reconnect with allies and alliances across the world after a period of isolationism from the previous administration. Biden has made calls to many U.S. allies, with hopes of fostering unity against global threats in the years to come. While some of the country’s largest alliances were criticized and sometimes rejected by the previous Trump administration, new survey data shows a significant majority of Americans still favor some of the country’s largest alliances and treaties.

Survey data like this highlights how a majority of Americans still favor global connections and international friendships, particularly when they unite to fight larger threats. For now, these threats to the U.S. – coinciding with the WHO, Paris agreement and United Nations – include the COVID-19 pandemic, climate change and the rising strength of China.

Ultimately, isolationism for the U.S. may have been doomed to fail from the start. Political, economic and social connections are the backbone of how the U.S. became the global power it is, and continued global alliances could be the only way to further prop up a democratic system of capitalism that has favored the U.S. for decades. There’s no question, however, that sentiment and support for isolationism has grown within the country. Depending on how politics continues to radically shift, this may not be the end of the U.S. removing itself from global conversations. 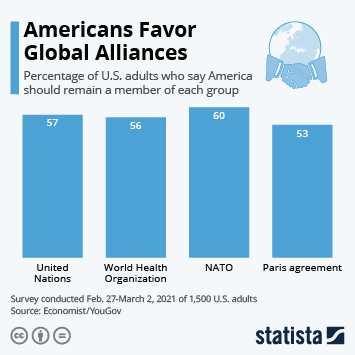 This chart shows the percentage of U.S. adults who say America should remain a member of each group.