88.9k
If you visited Wikipedia lately, and chances are you did, you probably came across a banner asking for your help to keep Wikipedia alive in its current (ad-free) form. For the past couple of years, the Wikimedia Foundation, the non-profit organization behind Wikipedia, has staged a big fundraising campaign toward the end of the year in order to cover the costs associated with maintaining a website of Wikipedia's scale. And with considerable success: Between July 1, 2015 and June 30, 2016, Wikipedia received $77.8 million in donations and contributions, up from just $2.2 million in 2007.

So what does Wikipedia need all that money for, some might ask. After all, the site's content is generated by thousands of volunteer contributors who don't get paid for their work. What people tend to forget is the fact that running a website of Wikipedia's size (roughly 15 billion pageviews per month) costs a lot of money. As our chart illustrates, the foundation's expenses have risen steadily over the years. In the past fiscal year, Wikimedia spent a total of $65.9 million, roughly half of which was for salaries and wages.

Critics of Wikipedia's fundraising often bemoan the fact that the Wikimedia Foundation is growing richer every year. However, it is not uncommon for a charitable organization of that size to build financial reserves in order to be guarded against an unexpected shortfall in donations at some point. 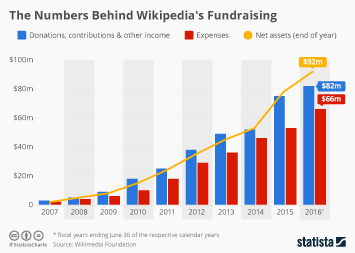 This chart shows how much money the Wikimedia Foundation received in the form donations and contributions since 2007.