Ten countries are set to account collectively for over half the world's projected population increase between now and 2050: India, Nigeria, the Democratic Republic of Congo, Pakistan, Ethiopia, Tanzania, the United States, Uganda, Indonesia and Egypt. Within the next seven years, India is expected to surpass China as the most populous nation. The United States is also going to be overtaken by Nigeria by 2050 to become the world's third most populous nation - Nigeria is currently posting the fastest rate of population growth worldwide. The following infographic shows the world's most populous nations in 2050 and it was created using the UN's data. 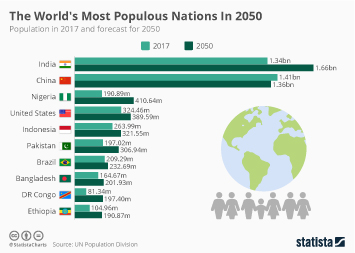