88.9k
Tesla's efforts to ramp up production are paying off and the company produced more than 53,000 cars in Q1 2018, doubling its output compared to the same quarter in 2017. In a major landmark, production of the Model 3 (28,578) exceeded combined production of the Model S and X (24,671) with total deliveries to customers amounting to 40,740. The Model 3 is now outselling other small and midsize luxury car models in the U.S., according to an analysis conducted by CleanTechnica's Zachary Shahan.

He claims that the Model 3 is crushing its "competitors" in that segment with total sales of the company's mass market endeavour estimated at 16,000 vehicles. The Mercedes C-Class is the closest individual model to the Tesla Model 3 with Shahan estimating July sales of 6,029 units. Even when sales from multiple vehicle models produced by the same company are added together, the Model 3 remains untouchable. For example, July sales of the BMW 2, 3, 4 and 6 Series are expected to reach 12,811 at the end of the month while customers will get behind the wheel of 11,835 new Mercedes C, CLA, CLS and E-Class vehicles. All of that means that Tesla would command a 23 percent of the small and midsize luxury car market in July, ahead of 17 percent each for BMW and Mercedes. 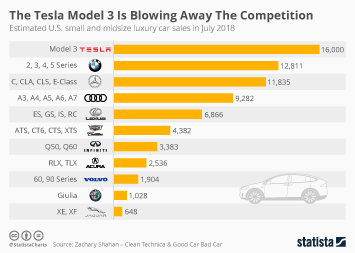