88.9k
Nearly two-thirds of Americans were against a cashless society, according to a recent survey conducted by CivicScience. Mobile payment and cashless stores are popping up across the country, between stores like Amazon Go and payment options like Apple Pay.

Using these services requires access to the banking system, namely a bank account and a credit card. According to the Federal Deposit Insurance Corporation, in 2017 FDIC survey showed that 6.5 percent of U.S. households were unbanked, meaning they lacked a checking or savings account, and an additional 18.7 percent of households were underbanked, meaning they had a checking or savings account but obtained financial products, like money orders or payday loans, outside of the banking system.

Some advocates and legislators worry that an increasingly cashless world will further disenfranchise America’s homeless and working poor, who may fall into these unbanked and underbanked categories. New Jersey and Massachusetts both have laws that prohibit stores from discriminating against customers choosing to use cash. Cities, like Philadelphia, New York, Chicago, D.C., and San Francisco, all have proposed or have laws regulating cashless stores.

Advocates of cashless stores point to the increased speed and ease of payment for customers, and the lower rates of theft that cashless places of business experience. Some cashless options, like Square Inc. and PayPal, offer payment services that don’t require a bank account. About 23 percent of respondents from CivicScience's survey said they were all for or OK with a cashless society. Just under a tenth of respondents did not have an opinion on whether having a cashless society would be a good thing or not. 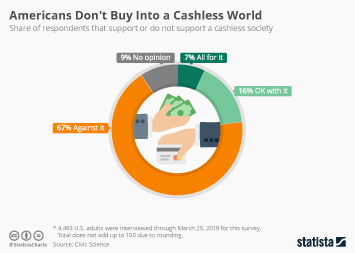 This chart shows the share of respondents that support or do not support a cashless society.