Maharashtra was the Indian state hit hardest by the coronavirus as of June 2, surpassing the mark of 70,000 cases. This means that, out of all cases in India, more than a third have occurred in the state, and and one fifth of national cases has been counted in India’s largest city, Mumbai.

Here, a large number of coronavirus cases are reported from informal settlements where people live in close quarters. The slum settlement of Dharavi, which is considered the second-largest slum in Asia after Oragi Town in Karachi, contributed majorly to the dismal numbers reported from Maharashtra and Mumbai.

When looking at deaths from COVID-19, Mumbai counted almost a quarter of all national fatalities.

According to the Ministry of Health, other hard-hit areas in the country are Tamil Nadu, especially Chennai, and Gujarat, especially Ahmedabad, as well as the capital Delhi. The distribution of cases in India echoes patterns of different COVID-19 outbreaks around the world, where major cities were most heavily affected – like in the case of New York. Poor populations living in close quarters have also fueled outbreaks in other parts of the globe, for example in Singapore.

Remote parts of India are only now seeing the coronavirus arrive. Sikkim and Nagaland for example, only recently reported their first cases. Case numbers also remain low in Ladakh as well as in the union territories of Goa, Puducherry and Dadra & Nagar Haveli. 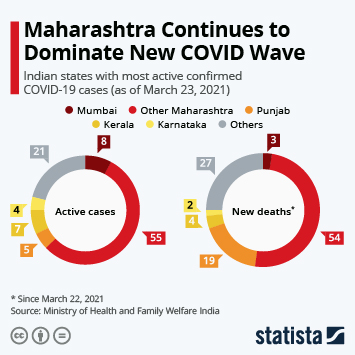 This charts shows the number of coronavirus cases by Indian state (as of May 28, 2020.)