January 20, 2017, did not only mark the beginning of President Donald Trump’s first term in office, it was also the day the Trump campaign filed for reelection and – more importantly – started its 2020 fundraising efforts. Trump’s unique habit of uninterrupted campaigning becomes starkly apparent when looking at the Political Action Committees, or PACs, which have spent the most money in the 2020 election cycle.

Two Trump PACs which are joint ventures of the Republican Party and the Trump campaign have spent enormous sums ahead of the election. The Trump Victory PAC shelled out $144 million, while the Trump Make America Great Again Committee has spent $327 million, more than the Democratic National Committee. According to Politico, the joint venture structure premiered under Trump is a never before seen streamlining in the reelection process that at the same time has the ability to hinder primary challengers and tie the Republican Party more closely to the incumbent president.

The Democratic Party lacks such a structure, but leads the list of non-party committees, with just one Republican PAC – America First – making the top 8. The Democrats have also been more successful through their small donations online platform, ActBlue (officially also a PAC), which brought in more than $2 billion, while the Republican counterpart WinRed brought in only around a quarter of that.

Looking at overall spending in the 2020 election cycle, Democrats are actually ahead of Republicans, with 67 percent of all candidate, party and outside money having been spent on Democratic causes. Yet, a large and sometimes wealthy Democratic primary field was responsible for around $2 billion in election spending, leveling to playing field to around $2 more billion spent each by and for Democrats as well as Republicans so far in the 2020 cycle.

Omitted from the list is only one PAC which belongs to a former presidential candidate. Pete Buttigieg’s PAC Pete for America Raised $102.6 million in the current cycle. 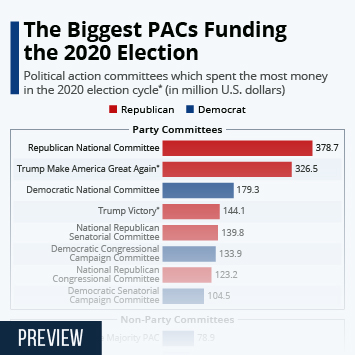 This chart shows the political action committees spending the highest amount of money on the 2020 election (as of Sept 17, 2020).