Published by Statista Research Department, Jul 6, 2022
Mobile search refers to querying on an online search engine with the use of a mobile device, such as a smartphone or a tablet. In comparison to a searching from a laptop or desktop computer, users on handheld devices are more likely to conduct local searches, seeking information distinct to the area where they are searching from. Mobile search queries are typically done with simpler data results in mind, such as sports scores, rather than complex subject pages.
As mobile online usage has become increasingly widespread, more companies are tailoring their website content to be more mobile-friendly, improving the experience for on-the-go internet users. The task is not only how to present information on a different medium, but also what kind of information to offer, as many users change their browsing behavior from one device to another. With the aid of virtual assistants such as Siri or Google Assistant, voice search has seen a significant growth in its adoption rate. As of the first quarter of 2019, 42 percent of the worldwide online population had conducted a voice search via any device within the past month.

Mobile devices accounted for over half of all organic search engine visits in the United States. Although desktop accounted for a large share of search advertising spending, mobile devices are quickly gaining space in this market. In 2018, about 63 percent of paid Google search clicks in the United States originated from mobile, with mobile phones accounting for nearly 56 percent of total clicks.

Against this backdrop, mobile search rises as a promising field, with users’ ability to quickly obtain relevant results based on their location as one of its most attractive features. In the second quarter of 2019, review site Yelp reached over 36.74 million unique mobile app visitors worldwide. During a December 2018 survey, 16 percent of online users in the United States stated that they used the internet to find a local business multiple times per week, highlighting the importance of location-based mobile services. Overall, 82 percent of U.S. shoppers who used their smartphone to help them shop had used "near me" searches on their mobile device. The most popular categories of local search lookups via mobile were food and entertainment.

With the increasing prevalence of online shopping and multi-channel retailers, consumers often turn to their mobile devices to search for product information. In 2018, 36 percent of shoppers worldwide reported to using their smartphones to compare prices while browsing through a retailer’s shop.

In the following 4 chapters, you will quickly find the 28 most important statistics relating to "Mobile search".

The most important key figures provide you with a compact summary of the topic of "Mobile search" and take you straight to the corresponding statistics. 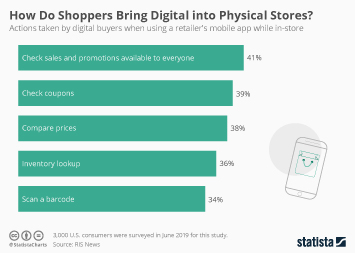