Many activities in modern life have changed as a result of the digital era in which we live and looking for love is no exception. Online dating has grown in popularity in recent years, and this trend is projected to continue. In 2022, there were over 366 million online dating service users. By 2027, it is estimated that there will be 440 million people seeking love through online platforms. Additionally, internet dating generated 2.86 billion U.S. dollars in 2022, with the market showing no signs of slowing down.

Tinder, well-known for its 'swipe right, swipe left' concept, is the online dating behemoth. It was the most downloaded dating application in 2022, with a total of 64 million worldwide downloads. Additionally, Tinder was downloaded in North and Latin America more than any other region. In the United States, 84 percent of online daters were aware of Tinder, and 37 percent of those individuals were using the platform. Not only is it widely known by singles looking for love, but Tinder is the most prominent dating service in the United States overall, followed by Match and eHarmony.

Matchmaking with the Match Group

Some industry leaders, including Tinder, Match, Hinge, and OkCupid, are all under the Match Group umbrella. The Match Group was founded over 20 years ago and has helped people find romance through their interests and life goals. In the third quarter of 2022, there were 16.5 million paid users of the Match Group. The Match Groups finds its largest audience in the Americas, accounting for almost half of all users.

Caught out by a catfish

Whilst hopeful singles turn to the internet in search of fun and romance, some internet users see online dating sites as opportunities for taking advantage of people. Catfishing is a misleading online behavior in which a person creates a fake profile, either on a dating service or a social media platform, to extort money from, or blackmail a victim. As of early 2022, around one in ten adults in the United States said they had interacted with a catfish online. Moreover, eight percent of U.S. men said they had sent money to a catfish as of January 2022.
This text provides general information. Statista assumes no liability for the information given being complete or correct. Due to varying update cycles, statistics can display more up-to-date data than referenced in the text.
Published by S. Dixon, Jan 26, 2023

Country with the largest online dating revenue in 2022
United States

Most popular dating apps worldwide 2021, by number of downloads 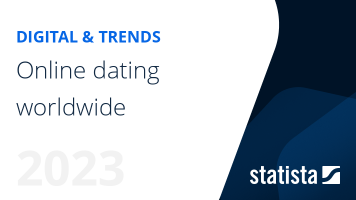 The most important key figures provide you with a compact summary of the topic of "Online dating worldwide" and take you straight to the corresponding statistics.

Online dating brands in the U.S.

Online dating brands in the UK