The Los Angeles Rams beat the Cincinnati Bengals in the LVI Super Bowl, staging a comeback game at their home stadium in Inglewood, California. The Rams were still down in the fourth quarter but managed to turn the game around against the Bengals, who were considered the underdog in the competition.

It was the second win for the Rams who played the Super Bowl five times - also in 1980, in 2000 and 2002 (they were called the St. Louis Rams then and took home the trophy in the former game) as well as in 2019. For the Bengals, it was the third Super Bowl appearance that ended without a win.

Five appearances give the Rams just as much Super Bowl clout as the Green Bay Packers or the New York Giants. Two wins put the Rams on the same level as the Miami Dolphins, the Indianapolis Colts, the Baltimore Ravens, the Kansas City Chiefs and the Tampa Bay Buccaneers, even though almost all of these teams needed fewer tries to take home two trophies.

The New England Patriots are the team with most Super Bowl appearances, according to statistics published by ESPN, followed by the Pittsburgh Steelers, the Dallas Cowboys and the Denver Broncos. Yet, the Patriots are among the teams with below average wins-to-participation ratios, with only six wins out of 11 Super Bowls played. The most unlucky teams among the Super Bowl participants are the Minnesota Vikings and the Buffalo Bills. They each played in the Super Bowl four times but failed to win any of those competitions. 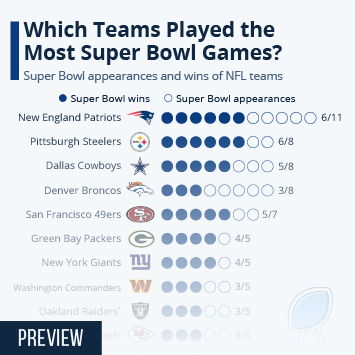 This chart shows the teams that played in the Super Bowl most often.