The alarm is being sounded by advocates across the U.S. of an impending eviction crisis, as moratoriums on rent payments due to COVID-19 restrictions begin to end starting in August. An enormous lack of policy or guidelines on continuing moratoriums or what tenants and landlords are supposed to do is expected to cause an eruption of evictions and turmoil. One study from Colorado shows just how dire the situation may be.

According to a study conducted by the COVID-19 Eviction Defense Project, between 19-23 million people are at risk of eviction by Sept. 30 due to moratoriums being lifted. That’s over 20 percent of the nearly 110 million renters in the country, at a time when the economy is entering a deep contraction and 44 million people have filed for an unemployment.

People of color, undocumented immigrants and low-income renters are among those who are expected to be most affected by this crisis. The study used models which incorporated income, employment, savings, household costs and other personal financial data to determine the 19-23 million number.

Income inequality and rising rent have been growing issues for decades in the U.S., and advocates and experts suspect this eviction crisis could be the boiling point for millions of low-income Americans into becoming homeless. The short-term costs of being evicted during a global pandemic and national financial depression are self-evident, however the long-term costs of not being considered for future apartments or houses and cratering credit scores are also heavy costs for those already in difficult situations.

According to analysts, there’s still time for local and national policymakers to resume moratoriums or create proper policy in order to avoid this crisis. Short-term emergency halts in rent payments are already being passed around the country at a local level. However, time is quickly running out for state and federal policymakers. 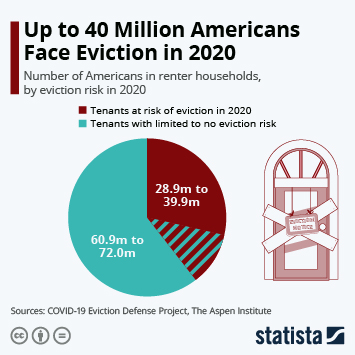 This chart shows the number of Americans living in rental households and those at risk of eviction by September 30.