Published by
Lai Lin Thomala,
Jul 5, 2022
Advertising is a billion business in China. As the world's second-largest ad market after the United States, China was estimated to contribute between 90 to 125 billion U.S dollars of ad spending in 2021. While traditional printing and broadcasting advertising channels continue to shrink, outdoor and internet ads have been thriving. The expansion is mainly driven by rapid technological advancement and a mobile-savvy population in the country.

Advertisers in China have reduced ad spending on traditional media in recent years. This decline is particularly distinct in newspaper advertising. Between 2013 and 2020, newspaper ad revenue fell from 42.5 billion yuan to only five billion yuan. Magazine advertising is also on the wane. In comparison, traditional broadcast ads still maintain a considerable market share. Television has been the most favorable advertising medium, especially among pharmaceuticals, cosmetics, and personal care brands.

Out-of-home (OOH) advertising, particularly subway ads, is an effective offline-to-online (O2O) marketing medium. The metro advertisements in China often include QR codes, which direct consumers to the brand’s Wechat page. Another common advertising format in subways in China: zoetrope, a digital imaging system installed in metro tunnels. Passengers can see a series of moving images inside the train on the window, which looks like a 15-second video. With these technology changes, OOH ad spending would very likely surpass 70 billion yuan in China by 2021 .

In a country with the largest online community in the world, the internet has gained a higher market share in the Chinese ad market. E-commerce, search engines, and social media advertising have been booming. In 2021, the market size of mobile advertising totaled at 439 billion yuan. WeChat, the most popular app in the country, plays a major role in brand promotion. Its Mini Programs provides advanced features to consumers, such as e-commerce and task management. With its significant market penetration and conversion rates, WeChat would probably remain as the most important channel for online advertising in the next few years. However, it is worth noting that ad frauds are more prevalent in China than other countries. In 2021, almost 30 percent of the online ad traffic in China was fake or invalid. Industry reports have shown that over 80 percent of the global fraudulent inventory came from China, costing a loss of 18.7 billion U.S. dollars for advertisers in 2019.

In the following 5 chapters, you will quickly find the 34 most important statistics relating to "Advertising in China". 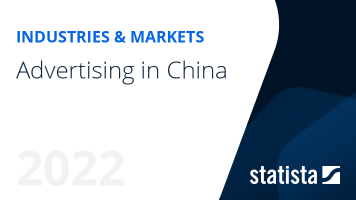 The most important key figures provide you with a compact summary of the topic of "Advertising in China" and take you straight to the corresponding statistics.