Reddit is a social news aggregation and web content discussion website founded in 2005 and headquartered in San Francisco, California. Registered Reddit members, also known as ‘Redditors’, can post content such as images, links, and text posts, on which people can upvote, downvote, comment, and share. The platform is organized by topic into ‘subreddits’, user-created boards that cover a seemingly infinite number of topics.
In December 2021, Reddit submitted a draft registration statement for public offering. However, the valuation of the company declined by over a third in early 2022, and it does not seem likely that the company will enter the public market in the immediate future. Reddit’s devaluation was not a standalone case as the beginning of 2022 saw difficulty for many social media companies, and even market leader Meta felt the impact of the slowing market.

Most of Reddit’s revenue is generated by advertising, and in 2021 the company generated an estimated 439.17 million U.S. dollars via ads. This is an increase of 148 percent in comparison to the previous year when ad revenues totaled approximately 176.71 million U.S. dollars. Reddit’s average revenue per user stood at 0.51 U.S. dollars in 2021, and whilst this figure pales in comparison to, for example, Facebook’s ARPU of 40.96 U.S. dollars, it is nevertheless a significant increase of 75 percent on the previous year.

Redditors have continued to stay loyal to the platform, which flew under the mainstream radar for some years. It is now one of the most popular global social networks in terms of user numbers, after Pinterest and Twitter. As of early 2020, there were around 430 million monthly active Reddit users worldwide. Reddit users also have the option of being a premium user, which means that subscribers can choose to pay a subscription fee to avoid advertisements. According to industry estimates, there were over 344 thousand premium Reddit users in 2021, through which the platform generated over 17 million U.S. dollars in subscription revenues.

Reddit is generally more popular with men. As of January 2022, 63.8 percent of global Reddit users were male. In the United States in 2021, most Reddit users were aged between 18 and 29 years, accounting for 36 percent of users in the country. The platform’s number of monthly active users (MAUs) grew substantially from 2019 to 2021, gaining 30 percent more users, and ranking ahead of well-established market players Facebook, Snapchat, Instagram, and Twitter.

Reddit is one of the most-visited websites online. In May 2022, the platform had around 1.7 billion worldwide visits. The majority of visits to the site were from mobile devices. Overall, the United States accounts for the largest share of traffic to Reddit.com, generating 47.13 percent of all traffic to the site, followed by the United Kingdom and Canada, both making up around 7 percent of Reddit’s traffic. In terms of traffic from other social media sites, YouTube accounted for nearly half of all social media referrals to Reddit. Twitter and Facebook followed, with 25 percent and 13 percent, respectively.

Reddit’s most popular AMAs and posts

AMA’s, which stand for “Ask Me Anything”, are a distinctive element of the platform, in which an exceptional or current topic can be discussed with someone directly involved. In 2021, the most popular AMA post was ‘I’m a lobster diver who recently survived being inside of a whale’, which gained over 90 thousand upvotes.

Bill Gates, who has completed numerous AMAs on the site, generated over 66 thousand upvotes during his ninth AMA in 2021. Additionally, in 2021, the three most popular posts on Reddit were from the r/wallstreetbets subreddit.
This text provides general information. Statista assumes no liability for the information given being complete or correct. Due to varying update cycles, statistics can display more up-to-date data than referenced in the text.
Published by S. Dixon, Sep 13, 2022 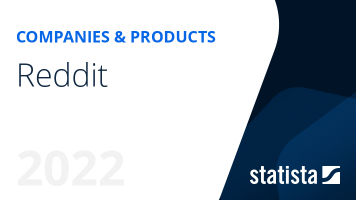 The most important key figures provide you with a compact summary of the topic of "Reddit" and take you straight to the corresponding statistics.