Published by
D. Tighe,
Oct 5, 2022
Over the past decade, and especially since the coronavirus (COVID-19) pandemic, it has become clear that e-commerce is increasingly becoming a mainstay in the European economy. In the past couple of years, for example, e-commerce accounted for a significantly higher share of retail sales in several Western European countries. Overall, the average share of e-commerce as a proportion of total turnover of businesses in the European Union has grown by nearly 10 percent since 2009. In other terms, online retail and, by extension, online shopping among consumers, have become very common in Europe and both continue to grow consistently.

Although shopping for goods and services online is ubiquitous in Europe, it is more common in certain parts of the continent than others. For instance, nearly 40 percent of Dutch consumers said in a survey that they shopped online on a weekly basis in 2022. By comparison, less than 25 percent of Norwegians and Finns did the same each week.

Depending on the country of origin, consumers also had different attitudes towards online shopping. But each of the surveyed countries did have one thing in common: whether it was the Netherlands, Germany, or France, just over half of shoppers had a habit of doing research online before making any major purchase. Additionally, European shoppers typically have a few prerequisites before deciding whether to buy an item they want online. When asked what they found most important, shoppers in a number of countries, e.g., France and Spain, frequently mentioned a fast and/or reliable delivery, a good returns policy, and in-stock availability of the product(s) in question.

E-commerce use during COVID-19

As was to be expected, the coronavirus outbreak had an enormous impact on offline and online shopping behavior on an international scale. A significant share of consumers in Europe said they had been shopping more digitally since the pandemic began and this was especially true in countries such as Spain, Belgium, and Italy. Since the crisis, some people in the UK said they adopted alternate behaviors. According to a survey, about a third of consumers in the UK said they looked into shopping online, while another third said they increased the amount of online shopping they did.

In the following 6 chapters, you will quickly find the 44 most important statistics relating to "Digital shopping behavior in Europe". 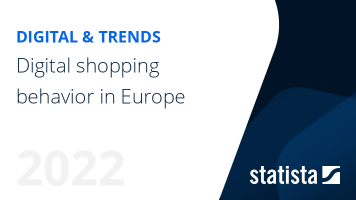 The most important key figures provide you with a compact summary of the topic of "Digital shopping behavior in Europe" and take you straight to the corresponding statistics.

Online shopping behavior in the UK