Binge-viewing in the U.S. - statistics & facts

Published by
Amy Watson,
Jul 9, 2020
Binge-viewing no longer occurs only when consumers are invested in a certain show or have more time to relax with their favorite content. Partially fueled by U.S. consumers’ love of SVoD (and the ways such services release new shows and movies), binge-viewing has accelerated to the point where watching multiple episodes of television shows or film series in one sitting has become the norm for many. Whilst watching traditional television remains the most popular media activity in in the United States, platforms like Netflix, Hulu, and newly launched Disney Plus are where the future of TV and movie viewing (and by extension, binge-viewing) is headed.

How does SVoD encourage binge-viewing?

Most Subscription-Video-on-Demand providers now offer hundreds of television shows and movies at any one time, and whilst the inability to decide what to watch is among consumers’ top frustrations, content is frequently lauded as one of the most important elements of a good service. Even if certain shows or movies are not available in one place but can be found in another, audiences are willing to pay for the privilege of having both. Large shares of SVoD users in the United States subscribe to several platforms, particularly younger generations. The vast of majority of Gen Z and Millennial consumers now have a video streaming service, and unsurprisingly also tend to be the heaviest binge-viewers. However, whilst a wealth of shows and movies is appealing, and for some consumers too tempting to resist, access to content via multiple services aside is not the only way in which SVoD contributes to binge-watching.

It is not uncommon for SVoD services to release every episode of a new TV show at once rather than staggering episodes over a period of weeks or months, giving subscribers instant access to hours’ worth of bingeworthy content to enjoy. Refreshing content catalogs in this way has progressed from being a benefit of SVoD to something which is expected by consumers, with around 60 percent of U.S. adults aged 18 to 45 years old preferring all episodes of a season to be released at the same time. In fact, the ability to binge-watch TV shows and movies is ranked among the most important features of video streaming services.

The effects of binge-viewing

Although the act of binge-viewing shows does not carry the same connotations as binge-buying, eating, or drinking, like any form of over-consumption the habit is not without its detrimental effects. Close to 90 percent of men and women in the United States have reported sleep loss due to binge-watching content on streaming services, and many adults also said that they had stayed awake all night multiple times in the last year to do so. The question of whether SVoD services should allow their customers to binge-watch has been raised several times in the media, but with consumers now accustomed to watching whatever they want, whenever they want, binge-viewing is here to stay.

In the following 5 chapters, you will quickly find the 34 most important statistics relating to "Binge-viewing in the U.S.".

Statistics on the topic
Share of women binge-watching online series for more than 10 hours at a time worldwide
2.6%
Share of female binge viewers in the U.S.
49%
Daily time spent watching TV per capita in the U.S.
2.86h

The most important key figures provide you with a compact summary of the topic of "Binge-viewing in the U.S." and take you straight to the corresponding statistics.

Mobile video in the United States 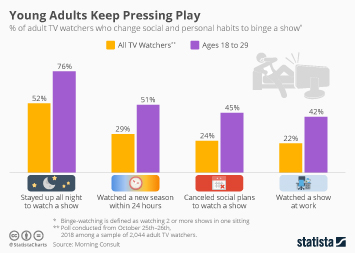