Published by Statista Research Department, Nov 24, 2022
Digital advertising is the fastest-growing segment of the advertising market in Russia. Over the past decade, the internet has steadily increased its popularity as an advertising channel; consequently, it has been attracting higher investment volumes than traditional formats, such as television and print media. Online ads accounted for over 54 percent of the total advertising expenditure in the country in 2021, a figure that was below 10 percent in 2009. Nevertheless, the dominance of digital advertising is forecast to decrease, as the Russian advertisers' spending on digital ads is predicted to drop from 4.3 billion U.S. dollars in 2021 to 2.9 billion U.S. dollars in 2024. As the market expands, new methods of online ad fraud emerge; for example, click fraud and hidden ads. In 2020, economic losses from ad fraud in Russia reached 0.32 billion U.S. dollars.

The highest-grossing digital advertising and marketing segment in Russia is performance-based advertising, which refers to a pricing model in which an advertiser pays for specific results; for instance, clicks, leads, registrations, and other user actions triggered by the ad. The segment covers formats such as search and targeted social media ads. In 2021, performance-based advertising generated a revenue of over 272 billion Russian rubles. Furthermore, Russia witnesses a growth in display advertising spending, which is forecast to reach 1.75 billion U.S. dollars in 2021. Display ads are most often placed in the form of banners and other content types on websites and mobile apps. In 2021, the highest revenue growth rates among digital ad segments were recorded for search and instream video advertising, at about 32 percent and 28 percent, respectively.

Mobile advertising is a growing trend in the Russian and global advertising industry. Between 2021 and 2027, ads communicated on mobile devices are forecast to increase their revenue share from 38 to 45 percent. Examples of mobile ads include SMS (Short Message Service) and in-app advertising. According to a survey conducted in 2020, one-third of Russian company brands placed ads in mobile apps for performance purposes, while almost 30 percent used them for branding.

Impact of the war in Ukraine on digital advertising in Russia

Following Russia's invasion of Ukraine in February 2022, Google Ads stopped operating in Russia. Furthermore, as Meta platforms Facebook and Instagram were restricted in the country, advertisers could not place ads on them any longer. Faced with these challenges, market players promoted on other social media networks, such as VK and Telegram, as well as used other formats, such as targeted SMS marketing. In March 2022, more than one half of interactive advertising professionals in Russia expected the industry to shrink by 26 to 50 percent in that year.

In the following 8 chapters, you will quickly find the 45 most important statistics relating to "Digital advertising in Russia". 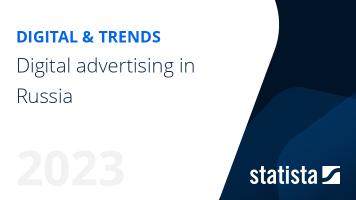 The most important key figures provide you with a compact summary of the topic of "Digital advertising in Russia" and take you straight to the corresponding statistics.